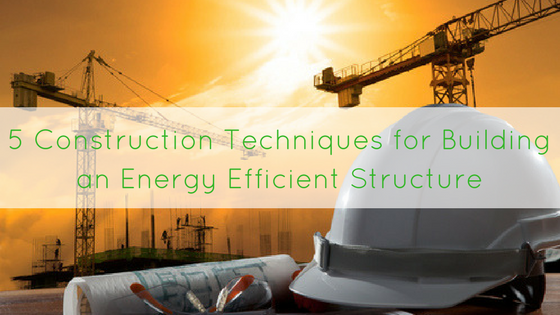 The issue of cost containment for a business is one that can often be the difference between profit and loss over the course of a fiscal year. When it comes to fixed costs, there’s a continuing belief that little can be done in this area when it comes to reductions, yet the construction of an energy efficient structure is one way to make that a reality.

To achieve this efficiency, certain techniques need to be undertaken by the builder or construction company. Many have become commonplace within the industry as the fluctuating costs of energy are a continuing cause for concern. Below are five examples that could be considered:

The lighting within a structure usually only matters to people when it’s needed or when it’s not working. In the past, the use of incandescent bulbs or halogen lamps might have been the preferred option. However, LED lighting is something that will pay off on a long-term basis and reduce maintenance costs in the process.

The reason is because it offers just as much light as its predecessors, yet produces an estimated one-fifth the amount of energy when compared to those older options. Due to that reduced energy use, not only will monthly bills be reduced but replacement of the bulbs will be far less frequent, thereby reducing the frequency of that annoying task.

This concept works in tandem with LED efficiencies by making sure that as much of nature’s natural light is prevalent within a structure as possible. This will usually mean work that strongly emphasizes glass which is often single-paned, though the double and triple-based varieties should also be considered, depending on specific needs.

Such techniques can also include the introduction of a skylight, with other passive solar designs also a consideration. This may something as simple as orienting the building that’s designed to achieve full impact from the southern side. While the latter isn’t possible when doing a renovation, making the most of what’s already available can be important.

Allowing air to escape through openings within a structure ends up putting more of a burden on an HVAC system, which is usually reflected with higher monthly bills. However, when Insulated Concrete Form (ICF) construction is undertaken, that structure becomes much more insulated. That helps avoid the issue of drafts or certain areas that are adversely affected.

ICF uses blocks of expanded polystyrene foam that are cut to specifically fit a particular situation. That precision allows for them to easy snap together and provide an impenetrable seal that offers tremendous value for those inside. In addition to making it an energy efficient structure, this sort of construction provides more protection against severe weather conditions and in the event of a fire.

Both homes and businesses can benefit from an energy-efficient HVAC system that can address such concerns as air intake with ideas like an adjustable exhaust hood setting. This will help make sure that periods that see little activity will result in reductions of things like cooling and heating.

Using the most current equipment in setting up an energy efficient structure might actually cost more when first installed. However, that added cost is something that the structure owner will have saved many times over by the time any replacement might be required.

Paying for utilities like electricity also means paying for necessities like water. There are a number of existing strategies that can help reduce this particular bill, including wireless consumption monitors that allow for either a consumer or business to have an up-to-date idea of their usage.

The idea of installing low-flow faucets and toilets will also avoid wasting water. When it comes to both for public buildings, using sensors can eliminate the issue of those using such facilities being reluctant to touch. This can also be a consideration during a renovation.

We had a vision of what we wanted our warehouse and office to look like. Thank God the folks at..

Stay updated on our projects and announcements